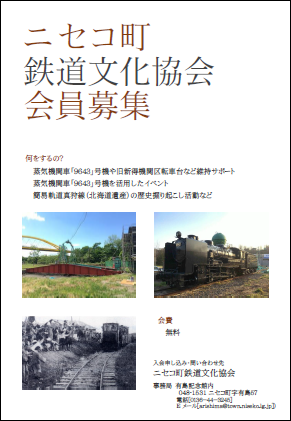 Please check the details at the link below

What are you doing?
・ Maintenance support such as steam locomotive “9643” and old Shintoku locomotive turntable
・ Event using steam locomotive "9643"
・ Historical excavation activities of the Hokkaido Heritage site of the simple orbit Makkari Line 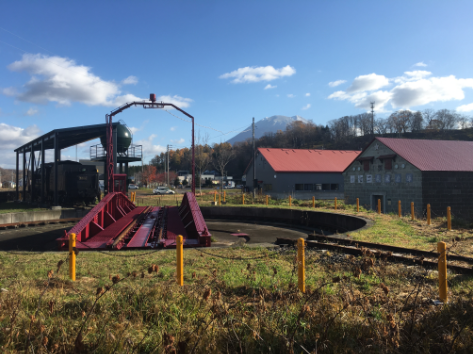 In the summer of 2020, a railroad heritage site will be born in the Niseko station adjacent area (Niseko Ohashi side).

In this place, until 1953, there was the old simplified orbital Makkari Line Kanta Station and the orbital turntable, and it was also a freight transshipment place with the National Railways.

When the “C62 Niseko” entered Niseko Station in 1990, the old Shintoku locomotive turntable was relocated to the same location, and was used to change the direction of Japan's largest steam locomotive C62.

After the abolition of the train in 1995, it was devastated, but in 2014, the railway photographer Yoshio Arakawa and others succeeded in moving the turntable manually.

In 2017, Mr. Yoshihiro Imon moved the steam locomotive “9643” preserved at the Sapporo Beer Garden to the same place, and in 2019, a shed was established and officially released.

And summer 2020. Here, "Niseko Express" retired in 2017 will be saved. After the car is retired, received a your support from everyone around the country by crowdfunding, Niseko Town is saved in the now be realized.

This “Niseko Railway Heritage Group” was realized with your thoughts. We look forward to your visit.

In 1936, Kanta (now Niseko) and Makkari opened. Agricultural products from the back were transported to Kanta, where they were transshipped to JNR and shipped across the country. Abolition in 1953. After the abolition, many gasoline cars and rails were diverted to the Tsurui village track. A sign indicating the station and the turntable will be installed in 2020.

Manufactured by a motor company in 1957 and installed in Shintoku engine zone. Contributing to logistics between Hokkaido and Hokkaido, supporting the Katsukatsu Passage's auxiliary locomotive from behind. In 1989, it will be relocated for the “C62 Niseko”, which extends from the following year to Niseko Station. The 1995 train was devastated. In 2014, railroad photographers Yoshio Arakawa and others succeeded in moving the turntable manually. In 2019, paint repairs will also be carried out.

Manufactured by Kawasaki Shipbuilding in 1914. After being used in the Chubu area, it was placed in the Asahikawa engine warehouse. In 1949, converted to a dedicated line for the Nisso Tenshio Mining Works, which was used until the discontinued line in 1974. After that, save it at Sapporo Beer Garden. In 2017, Yoshihiro Imon was relocated to Niseko Town being transferred. After the restoration and installation of a shed, it will be released in 2019. Whistling and headlights are also available.
This form (9600 form) was first used in Hokkaido in the Hakodate Main Line Yamasen section (between Otaru and Nagamanbe), and it was a form closely related to the town, such as towing express before the war.

In 1988, new internal production at the JR Hokkaido Naeho Plant for the first time in about 50 years. Steel bodies are produced at Muroran's steelworks and are “Doshinko vehicles”. Manufactured with innovative features in line with the steep slope and sharp curve of the Hakodate Main Line. It can be said that this is the first vehicle newly manufactured for the same section in the history of the mountain line. Highly evaluated in terms of design. In winter, it connects the Niseko area and New Chitose Airport. Also active as Fighters for a while. In 2017, scrapped due to aging.
In 2019, crowdfunding will be implemented, and vehicle purchase and transportation costs will be added and storage will be realized. In the summer of 2020, after painting and repairing, he returned home to Niseko Town.
In the future, depending on the time on the turntable, Mt. Yotei or Niseko Bridge will be displayed with different backgrounds, and a storage garage will be built. 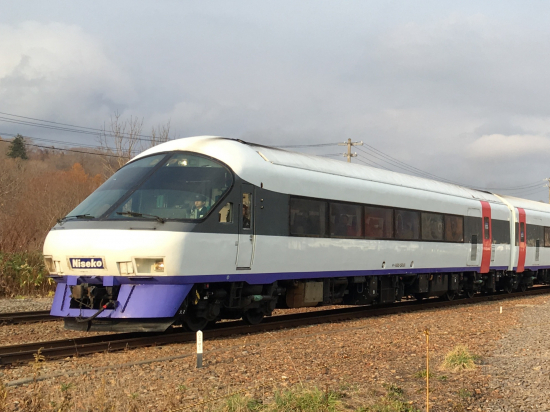 "Niseko Express" which appeared in 1998 for ski shipping to the Niseko area.
That smart and speedy appearance took the limelight at the time.
It was the same car that had been active in Niseko area and New Chitose Airport in winter season and all over the whole area at other times, but in 2017 it became scrapped because of aging.
As a vehicle that contributed to the promotion of tourism at Niseko Town, as well as a vehicle that incorporates various innovations and has a name in the history of railways in Hokkaido, a project that you want to save at Niseko Town, which has a deep connection, It was launched.

We will utilize cloud funding to recruit expenses required for returning to the village.
Crowdfunding is a combination of crowded and funding, and by sending out your own activities and dreams through the Internet, we want to support people and activities that are in agreement with our thoughts. It is a mechanism to raise money from the person who gives me. A wide range of projects are being implemented, such as developing country support, product development, and the production of autographs.

Please check the details at the link below

Homecoming project of "Niseko Express" (Thank you)
I achieved my goal

This project, supported by 494 supporters, has made it possible to return one Niseko Express, which is related to Niseko Town to both Ryosato.

From now on, we will move in coordination with the relevant places for transfer and preservation in the town. In addition, we will prepare for return goods to all of you. As soon as we see the movement about these activities, we will introduce them from time to time in this article.

First of all, I am in a hurry, but I would like to thank you very much.