The town has recently been selected as an "SDGs future city" (* 2) from the country as a municipality that will make efforts and proposals for achieving SDGs (* 1).
SDGs are universally adopted international goals to realize a sustainable world. 17 goals aimed at achievement by 2030, such as "eradication of poverty" and "clean energy" are set.

The town has been practicing and working on community development such as "practicing self-government through community participation and information sharing," "Eco-Model City initiatives," and "making unique development rules." If these initiatives are replaced with the 17 goals of the SDGs, they will be Goal 17 `` Partnership '', Goal 7 `` Energy '', Goal 11 `` City development that can continue to live '', in other words, I think that it was also the goal that was aimed at.

In town, we will continue to refine the town development so far and practice initiatives ahead. It is an effort to create a "mutual aid society" that can be handed over to children of the future, and efforts to create a sustainable town, and if it continues further, this effort itself will contribute to achieving the goals of SDGs, as a future city of SDGs We think that it is also an effort.

In addition, when selecting the SDGs Future City, it was also selected as a “municipal SDGs model project” (* 3), and with the support of the government, Niseko Town proposed the “NISEKO Life and Model District Construction Project” (* 4) ). 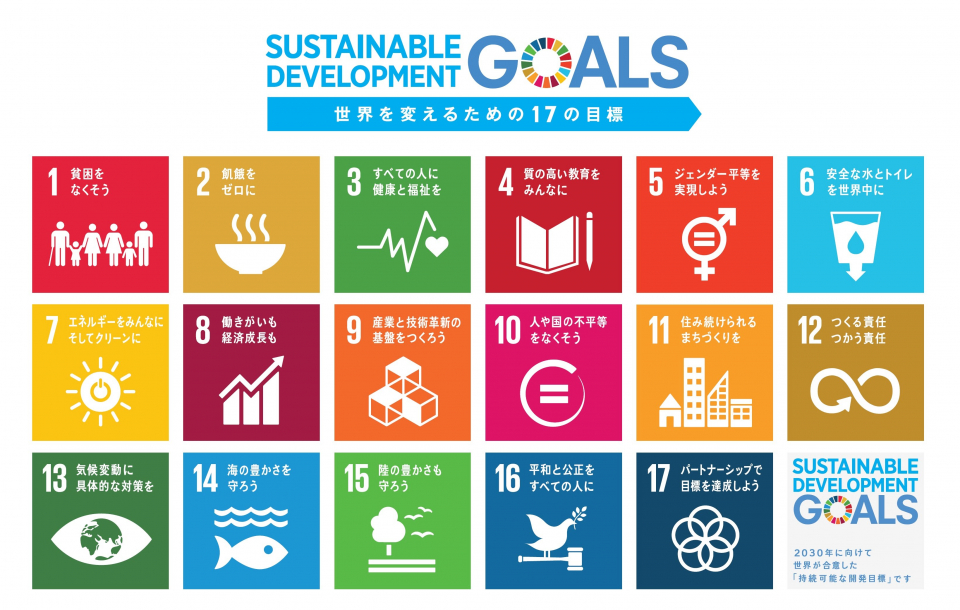 ※ 1) SDGs: Abbreviation for Sustainable Development Goals
SDGs are "sustainable development targets", which are unanimously adopted under the participation of over 150 member countries' leaders at the United Nations Summit in September 2015, "2030 Agenda for Sustainable Development" ( The international goal from 2016 to 2030 as stated in the Action Plan).
It consists of 17 goals (targets) to realize a sustainable world and 169 related targets, pledging not to leave anyone on earth. For example, the first goal is "1 lose poverty". And, as a common plan of the world, "Tackle all over the world by participating in (participating in developing countries / developed countries)", "Tackle all problems at the same time (all issues are related, simultaneous in parallel)" The point is that it is characterized as such.
The pursuit of the various goals shown in these 17 goals and 169 targets is actually related to our daily lives, contributes to solving local regional issues, and promotes sustainable town development. is. Then, Niseko Town practice of self-government by the information sharing and community participation that has been working so far, the landscape measures and environmental policies, earn strengthening of power, "such as regional economic circulation Niseko Town considered to be a high urban development and the affinity of" We have decided to promote these initiatives together with the town development we have done so far.

About other SDGs future city

For details on the SDGs future city in the whole country, please see the following Cabinet Office website

Local governments selected as SDGS future cities will formulate the SDGs Future City Plan in order to concretize their proposal contents in cooperation with the country from now on.
Niseko Town SDGs Future City Plan will be formulated in August 2018 after confirmation by public experts and public comments, and will be published in October 2019 after revision.

The “NISEKO Living and Model District Construction Project” proposed by Niseko Town in FY2018 was selected by the national government as a local government SDGs model project.
This project aims at sustainable development of a new block in response to population growth and labor shortage in Niseko Town. Synergistic effects of "economy", "society" and "environment" based on the SDGs Is to be implemented as an integrated approach.
In this project, in collaboration with Club Vauban, a specialist group of energy and architecture, a project that is disseminated to the world with reference to the Vauban district in Freiburg, Germany, which is called the world's best eco town, and Zermatt in Switzerland. Aiming to reduce the burden on the environment by acquiring the know-how of housing construction with high fuel efficiency and disaster prevention through the development of human resources at local artisanal shops, by eliminating the shortage of workers in companies Will serve as a platform for investment and promote the internal circulation of the economy.
Niseko Town has been working on “resident participation” and “information sharing” before the Town, People and Work Creation Law, and based on the “Basic Ordinance for Town Development,” each townspeople thinks and acts based on “self-government”. I am working on it. In this project as well, we will promote initiatives based on "resident participation" and "information sharing", design active community activities from the beginning, and spread new autonomous organizations and activities.

In order to promote the NISEKO life and model district construction project, the necessity and concept of this project are communicated through the town planning lecture, community briefing, and public relations magazines.
In order to let more people know about this project, we will provide video about the state of explanations at business briefings and town development townsman lectures.

About the SDGs initiatives in Niseko Town, we will tell you about the public relations special feature and the introduction status so far, the future publication schedule, the acceptance of inspections, the popularization activities, etc.
・広報ニセコ2019.5月号より定期連載コーナー「みんなでSDGs!」開始