Niseko Town was separated from Makkari-mura (currently Rusutsu-mura) in November 1890, and the Tochocho government office was established in the current Motomachi district. Niseko Town has been developed by ancestors who have settled the pioneering hoe in the present Nishitomi area and faced many difficulties under the severe natural conditions.

The remains of the Old Stone Age (Note 1) and the Jomon Period (Note 2) are left in the town. The Paleolithic Age is the final stage of the Ice Age, and the strait around Hokkaido is in a state where parts of land are connected, so it is considered that people have moved in search of food.

In the Jomon period, the climate also approaches the present state, and the lifestyle changes from the past lovely life to the settlement life. At this time, people seemed to have lived in the hills of the Rishiribagawa and many other ruins such as earthenware and arrowheads are left.

Things about prehistoric times are revealed from ruins. However, the records from the Middle Ages (Kamakura, Muromachi era) to the late stage of the Edo era that the Ainu race society and culture was supposed to have been formed have not been found and the actual state remains unknown.
Note 1: The age of more than 13,000 years ago, making tools that mainly use stone, which used to live everyday life on a daily basis
Note 2: The period from 12,000 years ago to 2,300 years ago that used earthenware as a container and had various cultural structures

2. Niseko from the Edo period to the middle of the Meiji Period

Niseko Town is located in an area called “Shiribeshi”, but this name was given to the pioneer in 1869 (Meiji 2) by adopting the plan of Takeshiro Matsuura.
Matsuura has been investigating the watershed of the Shiribetsu River twice at the end of the Tokugawa period, considering the Sibevetsu Mountain (current Mt. Yotei) flowing in the center of this region in the middle of this region as the backward woof of "Nihon Shoki" (Note) I made this region's country name "Shiso".
In the early part of Edo, there was no Ainu settlement because the river flow was high from near Niseko Town it was difficult to fish salmon and fish. However, when the Ainu learned that the basin was rich in salmon and other resources, it seems that she came to work in the fishing season.

Note: Japan 's secretary is Japan' s first emperor 's history book, completed in 720. When Abe Rikao who was a national guard of the Hokuriku region conquered Ezo led by the water army, it is said that the administrative agency has set up the "back yawun" (administrative agency) in accordance with the opinions of the two Ezo, and placed the county officials. 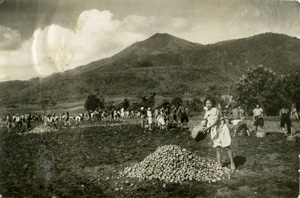 In the Meiji 27, the land which had become an imperial premises forest was put into a national forest. This made it possible to develop. In 1896 the setting of the landscape was done and the hoes of cultivation entered.

Unlike other areas, Niseko Town is characterized by the fact that it was developed by farmers and group settlers invested by Honshu capitalists. Among them, the famous farm nationwide is "Arishima Farm".
Arishima Farm is a farm where Takeshi Arishima (father of Mr. Takeo) got warheaded in the unpublished area and cleared up in Meiji 32. This farm was accepted by Meiji in 1968, but declared free opening of the farm in 1911 and gave agricultural land free of charge to peasants. Peasants organized the "Kanta Symbiosis Farming Usage Association" and managed all the farm facilities as shared property. This will be continued until the Act on Special Measures for the Establishment of Self-Establishment in 1954 was enforced. This act gave a great reaction to the society at that time. 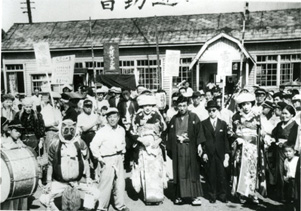 Around 1890, Kata Village (now Niseko Town) was considered undeveloped by Makkari Village, so all clerical work including family register work had to go to Makkari Village.

In the Meiji 34 era, the movement of the residents who wanted the village became active, and the first inhabitants' meeting was held on 17th September. On October 16 of the same year, a public notice of the village was issued from Hokkaido, and it was decided to recognize the village in a short time. There were 308 units in those days. The doorship office was placed in Motomachi.
After that, the population grew steadily, and in the Meiji era 44, 1,451 households had swelled up to 7,446 people. Although the population has been maintained at 8,000 by 1965, the outflow of the population continued as the young people flowing out to the cities and farming due to successor difficulties increased. Current population is around 4,600 people.

In addition, regarding the revision of the name of the town, there was a movement in 1944, but it ended in a misfire, and the second movement created the second katakana town ``Niseko Town'' in Japan in 1964. It was decided.
Here, only an overview is provided. For details, please see "Niseko Town 100 Year History".

"Niseko Town 100 Years History" is a set of upper and lower volumes because the content has been greatly enhanced from "Niseko Town History" published 80 years ago 20 years ago.

The town sells this "Niseko Town 100 Year History". You can buy it if you live outside of town. 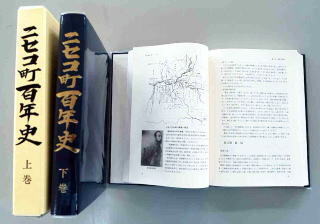 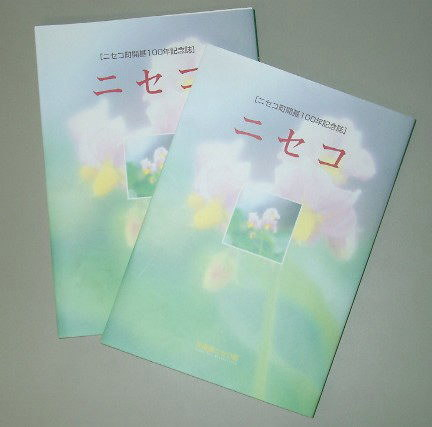 This memorable magazine consists of five themes, "100th year's heart", "100th year family", "100th year's word", "100th year landscape" and "100th year's dream" It has been devised to allow you to enjoy using a lot of pictures and diagrams, etc. so that everyone can see with eyes, for ease of understanding.
In addition, people who contributed to town planning (people), industries that supported the smile of the area (industrial version) seeking a life to interchange (living edition), sports and culture nurtured in nature and culture (nature · art · Culture · Sports Edition), expressing the flow of 100 years as easy to understand and summarized it. We would be grateful if you could read it. The photo of the cover of the commemorative magazine was taken of the flowers of potatoes.